Summary: Facebook’s challenges of dealing with content moderation around “nudity” have been covered many times, but part of the reason the discussion comes up so often is that there are so many scenarios to consider that it is difficult to create policies that cover them all.

In March of 2016, activist Celeste Liddle gave the keynote address at the Queen Victoria Women’s Centre’s annual International Women’s Day address. The speech covered many aspects of the challenges facing aboriginal women in Australia, and mentions in passing at one point that Liddle’s Facebook account had been repeatedly suspended for posting images of topless aboriginal women that were shown in a trailer for a TV show.

“I don’t know if people remember, but last year the Indigenous comedy show 8MMM was released on ABC. I was very much looking forward to this show, particularly since it was based in Alice and therefore I knew quite a few people involved.

“Yet there was controversy because when 8MMM released a promotional trailer for the show prior to it going to air. This trailer was banned by Facebook because it featured topless desert women painted up for ceremony engaging in traditional dance.

“Facebook saw these topless women as “indecent” and in violation of their no nudity clause. On hearing this, I was outraged that Arrernte woman undertaking ceremony could ever be seen in this way so I posted the trailer up on my own page stating as such.

“What I didn’t count on was a group of narrow-minded little white men deciding to troll my page so each time I posted it, I not only got reported by them but I also got locked out and the video got removed.” — Celeste Liddle

The publication New Matilda published a transcript of the entire speech, which Liddle then linked to herself, leading her account to be suspended for 24 hours and New Matilda’s post being removed — highlighting the point that Liddle was making. As she told New Matilda in a follow up article about the removal and the suspension:

“I feel decidedly smug this morning, because everything I spoke about in my speech on this particular topic just seems to have been proven completely true...

Facebook’s notice to New Matilda claimed that it was restricted for posting “nudity” and said that the policy has an exception if the content is posted for “educational, humorous or satirical purposes,” but did not give New Matilda a way to argue that the usage in the article was “educational.”

Many publications, starting with New Matilda, highlighted the contrast that the same day Liddle gave her speech (International Women’s Day), Esquire released a cover story about Kim Kardashian which featured an image of her naked but partially painted. Both images, then, involved topless women, with their skin partially painted. However, those posting the aboriginal women faced bans from Facebook, while the Kardashian image not only remained up, but went viral. 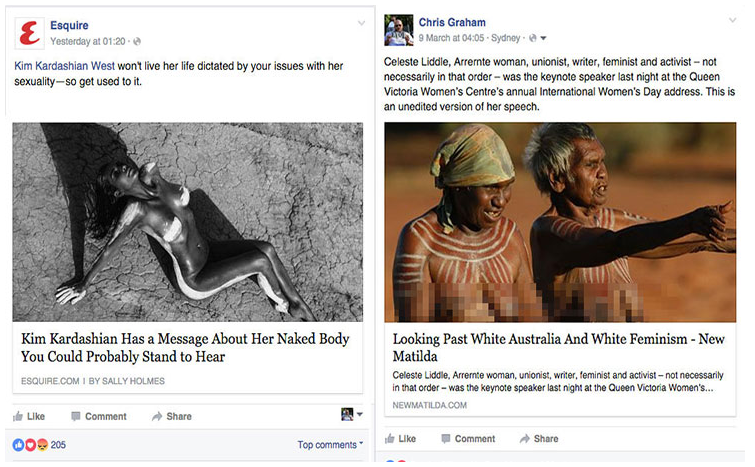 Resolution: After this story got some attention, Liddle launched a Change.org petition asking Facebook to recognize that aboriginal women “practicing culture are not offensive.”

Facebook's standards are a joke. They are blatantly racist, sexist and offensive. They show a complete lack of respect for the oldest continuing culture in the world. They also show that Facebook continually fails to address their own shortfalls in knowledge. Finally, they show that Facebook is more than willing to allow scurrilous bullying to continue rather than educate themselves. — Celeste Liddle

New Matilda requested comment from Facebook regarding the removal of the link to its story and were told that even if the sharing was for an “awareness campaign” Facebook still believed it should be removed because some audiences in Facebook’s “global community” would be “sensitive” to such content. The company also notes that in order to allow its content moderators to apply rules “uniformly” they sometimes need to be “more blunt than we would like.”

“We are aware that people sometimes share content containing nudity for reasons like awareness campaigns, artistic projects or cultural investigations. The reason we restrict the display of nudity is because some audiences within our global community may be sensitive to this type of content – particularly because of cultural background or age. In order to treat people fairly and respond to reports quickly, it is essential that we have policies in place that our global teams can apply uniformly and easily when reviewing content. As a result, our policies can sometimes be more blunt than we would like, and restrict content shared for legitimate purposes. We encourage people to share Celeste Liddle’s speech on Facebook by simply removing the image before posting it.”

Written by The Copia Institute, October 2021

We just sent you an email. Please click the link in the email to confirm your subscription!